One of the most popular trades since the financial crisis is going out of fashion as rising rates punish down- borrowers.

«scratch and dent» mortgages — which are tied to borrowers that fell behind or began repaying their debts after a default — accounted for the largest piece of the U.S. residential securities market without government backing over the last decade.

But rising rates make it harder for homeowners to refinance their mortgages, potentially lengthening how long it will take them to pay off that loan. This means bond buyers could get stuck with these loan and loan mortgage securities for more time than they anticipated. And investors are taking a step back, pushing yields higher.

«There are higher rates across the board, which has a fairly negative impact because it impedes the ability of the borrower to refinance out of their properties, and is also deadly for bond duration,» said Neil Aggarwal, senior portfolio manager and head of trading at Semper Capital.

The majority of the underlying loans have already been changed to very low fixed rates. A slower pace of prepayments than originally assumed makes the bond riskier and can impact its worth. «From an investor’s point of view, a  bond can suddenly become a six- or  bond,» he added.

The supply of  mortgage bonds reached a peak of nearly 50 percent of the RMBS market, which are those that aren’t sold and guaranteed by government agencies Fannie Mae or Freddie Mac, in 2014. Since then, it’s comprised more than of the $386 billion in aggregate issuance, according to Sifma.

That popularity is now slipping. Spreads have begun to widen recently after trending tighter for more than two years. Investors are also demanding more favorable terms in exchange for taking on more duration risk and absorbing additional issuance.

The average yield for outstanding bonds rose 60 basis points to 4.23 percent over the last year and are near highs. Senior tranches of the mortgage securities added 89 points to 3.85 percent, while mezzanines added 35 basis points to 4.46 percent, according to data provider Intercontinental Exchange (ICE) Data Services.

«There’s a possible expectation on investors’ part that collateral performance may deteriorate because of higher rates; moreover, issuance has overwhelmed demand, or is starting to,» said David Varano, director of market research and strategy at ICE. «To a certain point, demand is satiated.»

The securities are made up of some adjustable rate mortgages, which would be at a higher risk of default as rates increase, Varano said. 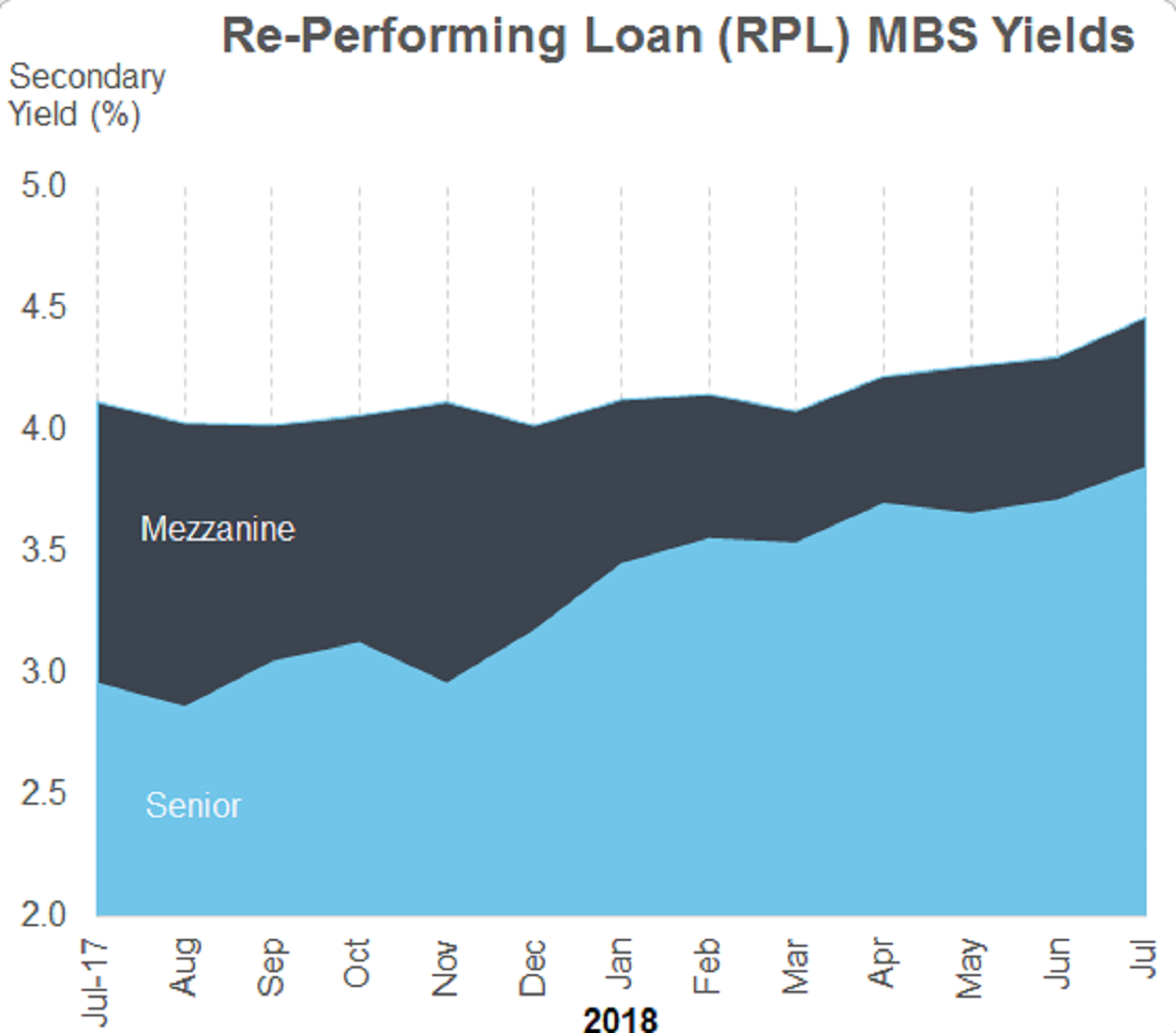 «RPL deals are not viewed quite the same as they were a few years ago,» he said. «In that way, they’re similar to the NPL market, which has mostly dried up because there’s not that much inventory left. If you have a loan platform and are buying RPLs now, you’re a lot more careful about your purchase strategy.»

The increase in  mortgage bonds since the 2008 mortgage meltdown highlights how private equity firms, hedge funds, and REITs were able to gain access to and profit from a recovering housing sector.

Following the crisis, banks, Fannie Mae, Freddie Mac, the of Housing and Urban Development, and others flooded the market with discounted NPLs. This lasted for eight years as these entities purged risk from their balance sheets, Aggarwal said.

«Investors acquired these assets at investable yields and securitized these loan packages into financing vehicles,» he said. «It was the most popular trade.»

Firms such as Cerberus Capital Management, Bayview Asset Management, Lone Star Funds, and Angelo Gordon created businesses bundling these loans into securities. The loan purchasers wagered borrowers would be able to get current as servicers loosened terms, forgave principal and extended repayment times. This eventually happened and many were able to hold on to their houses.

Issuers then adapted and bought up these loans, securitizing them into longer duration bonds rated by credit rating firms. Others soon followed.

«It’s a  scenario,» Sharga said. «The borrower gets to keep the house, and then, if they become current, you have a  loan, which is more valuable to an investor than an NPL.»

— With assistance by Tom Freke